In regards to the demolished Castle, Schlockstar asked me as an aside if I knew anything about a dance hall that used to be on Elk Rock Island. I didn't know of any dance hall, but I have been to the island (which you can walk to in the summer, when the east channel dries up as the Willamette recedes) & noticed the concrete stairs & dock on the west side of the island & wondered at its purpose.

Turns out the dance hall was a Friar's Club, & a notorious one at that, involving lots of booze, gambling, & police raids.1 Quite a large structure, too. For those not familiar w/ the area, that would be the modern-day Milwaukie waterfront park behind the island to the left. 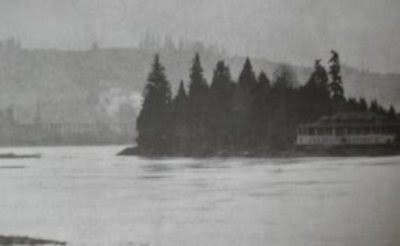 Milwaukie residents steered clear of the hall of ill repute, but Portlanders came by the streetcar load, & then were ferried to the island - hence, presumably, the concrete landing on the west shore.2

I couldn't figure out the duration of the club's raucous operation. Grain export magnate Peter Kerr acquired the island in 1910, & Oregon went dry on January 1, 1916, & I doubt the establishment survived prohibition as a juice bar or somesuch.

Kerr donated the island to the city of Portland in 1940.3

As an unexpected bonus, it turns out the Milwaukie Museum has in its possession the sole surviving mule-drawn streetcar of the Portland Street Railway! Established in 1872 by rail baron Ben Holladay, the PSR ran its diminutive streetcars up & down Front Street from Glisan to Caruthers & back. When Holladay died in 1887 ownership transferred to his brother Joe, who kept the line running the length of its entire franchise, which expired September 9, 1896, earning it the distinction of Portland's 1st & last horse-drawn streetcar company.4

Should you be so inclined, the Milwaukie Museum is located at 3737 S.E. Adams St. in Milwaukie, but is only open 11-3 Saturday + Sundays. Haven't been myself, but it seems a great small museum!

Oh thanks for this. I have visited this island a couple of times and was puzzled by the concrete dock on the river side - the west side.

The location is wrong or something is. There's no hill like that going inland to Milwaukie. The is a hill on the Lake Oswego side and also south of the island on the River Rd side. I've been to the island and found square nails (metal detecting) and I can not figure the layout of the night club. There's no cement or wood pilings that show a foundation. There's some railroad tie steps, but not sure how old they are.
There's a boat/ferry landing on the west side of the island and some stone steps. I'd sure like to know from those steps, where the club sat.

The club was on the northeasst corner of the island with a foot bridgt that went west to the concrete boat landing in the cove. I've seen no traces of either in 20 years of walking the islands trails and paths. The railroad tie steps at various locations are very recent (2000's) and part of trail upgrades.

The photo is correct, a view from the direction of the current riverside park in Milwaukie. The waterway in the photo is the east channel around Elk Rock Island that dries up in the summer, not the Willamette River proper, which is out of the picture to the right. The river curls around to the east upstream from the island. The hills seen behind the island are on the west side of the river, toward West Linn. The railroad trestle in the background to the left of the island may be the eastern approach trestle to the Lake Oswego railroad bridge.